Creative cartographers have adorned South Australia with rivers galore, despite the fact that decent rivers are actually in short supply. The notable exception is the River Murray which meanders through the state, although in fairness it originates 2,500 km (1,600 miles) away. Most rivers in SA are either short little coastal affairs, or outback waterways which are part-time rivers, flowing only in wet years. Others, such as “American River,” are not even rivers at all, but inlets to tidal lagoons!

Adelaide’s “Port River” is another misnomer. Geographically speaking, it is not a separate river but merely one branch of the estuary of the River Torrens. At least it was once upon a time. Sadly, the River Torrens estuary has long since been diverted in the name of progress by various flood mitigation schemes and no longer flows into the Port River. Instead the Port River now connects to the artificial West Lakes which in turn connects to Gulf St Vincent, forming a giant circulating loop.

Originally named the “Port Creek,” it was officially discovered by Europeans in 1834 by Captain John Jones, just 2 years before South Australia was founded. It was a barely navigable shallow, narrow tidal creek winding between mangrove swamps. Nevertheless the fledgling colony desperately needed a port and this “river” was the best on offer. The first port was situated as far south as was navigable, at Old Port Reach, the goal being to minimize the road distance to Adelaide. Conditions were so poor though that it was known as Port Misery.

In 1837 a harbour was official declared and Captain Thomas Lipson took up residence as Harbour Master with the first migrants landing in the same year. Three years later conditions finally improved when the port relocated a couple of miles and a proper wharf was built here.

Eventually the port was considered too shallow for the largest ocean going ships so in 1908 yet another port was constructed, this time near the entrance at Outer Harbor. Smaller vessels continued to use the original port facilities though, and still do today. Cruise ships now dock only at Outer Harbour.

To be clear, the River is not particularly scenic, but most people seem enjoy the hustle bustle of visiting an active port and what better way than from the water? Today the landscape is very industrial with everything from power stations to cement factories and grain loaders to a high-tech submarine facility.

Amazingly, the waters are clean enough to host a large bottlenose dolphin population which has been helped by the creation of the Adelaide Dolphin Sanctuary in 2005. More than 300 dolphins are regular visitors to the Port River, which is the only place in the world where wild dolphins live within a city. 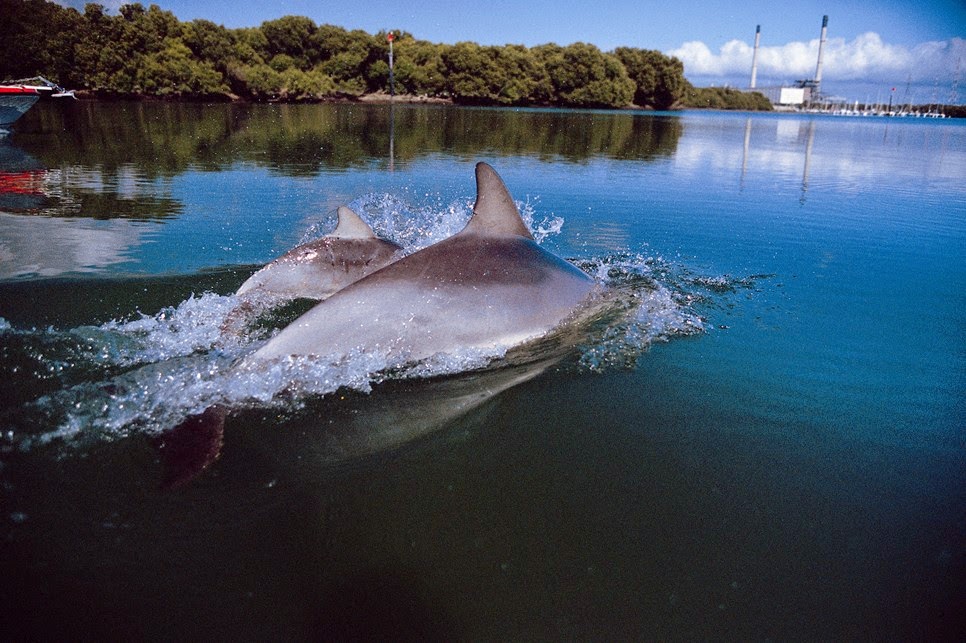 Then there is the “Ships Graveyard” on the North Arm which has 25 identified shipwrecks, the remains of the iron and wooden ships that were abandoned between 1909 and 1945. Apart from delighting canoeists and kayakers, birds love to roost in the hulks.

Another attraction is the Torrens Island Market, a fruit, veggie and fish market operating every Sunday, where fresh fish can be bought direct from fishing boats. Have I mentioned how tasty South Australian seafood is?

I’ve only overnighted in the Port River once, and that was by mistake. Two years ago I planned to take my parents on a short cruise of the River. It turned out to be a very short cruise since I ran aground within 20 minutes of leaving the marina. If I chose to overnight in the Port River I would do it here instead, just north of the old Quarantine Station jetty on the western side of Torrens Island.
Be advised that cargo ships often hurtle along faster than the 7 knot speed limit in order to maintain steerage, so keep a good lookout. Once as I was cruising down the river on one engine at a respectable 6 knots when I noticed a big freighter bearing down on me at 8 knots. High time to fire up both engines and skedaddle!