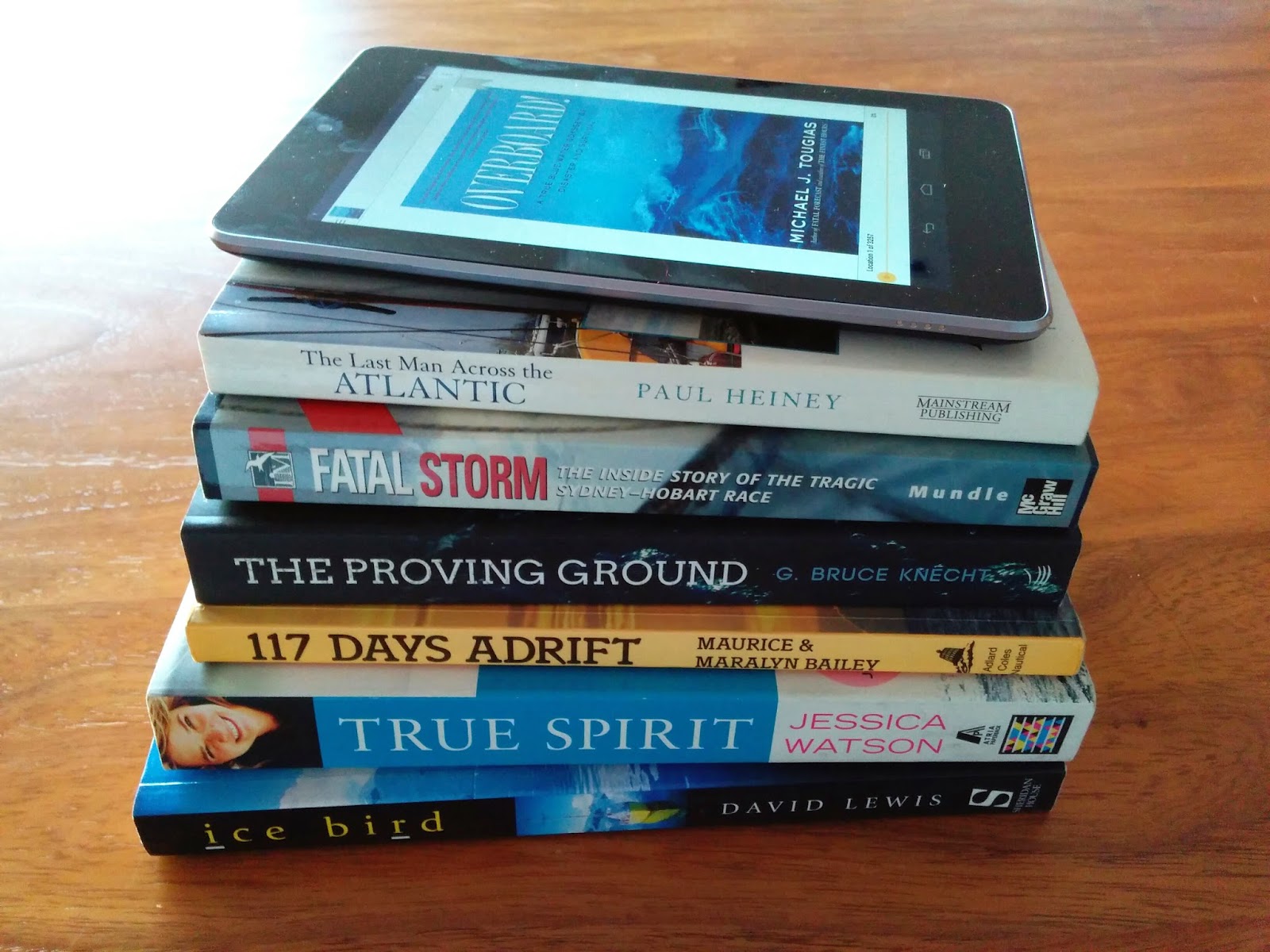 It’s almost winter down under, but up north you’re about to enjoy your summer holidays - lucky you! So I’ve compiled a list of my top 10 non-fiction sailing books for your holiday reading pleasure.

Let’s start with some amazing accounts of sea survival in the face of sailing disasters.

An oldie but a goodie, 117 Days Adrift is the 1973 account of Maurice and Maralyn Bailey’s amazing survival in the South Pacific. It's written in a plain style which almost beguiles one into thinking that being adrift for months on end is quite a workaday affair. I loved the sketches which helped bring the story to life. The Baileys clearly had ample time for reflection, and to quote them: "How many people have the opportunity to sit quietly and analyze their feelings?" What struck me most is how the will to survive makes all the difference, and in this adventure it was Maralyn who had an unshakable confidence that they would be eventually rescued. The less optimistic Maurice was fortunate in having such a positive partner with him.


A few years later, Steven Callahan did not have the luxury of a partner to help him survive. In Adrift: Seventy-six Days Lost at Sea he describes his 1981 account of his incredible survival at sea, the first person known to have survived alone for over a month. He did at least have a copy of the Bailey's book to keep him company. (The only other person who reportedly survived alone longer is El Salvadoran fisherman Jose Salvador Alvarenga).

More recently, Overboard by Michael Tougias is an enthralling account of storm survival. This time it’s 2005 and in the midst of a Gulf Stream hurricane, midway between Connecticut and Bermuda. There are many lessons for blue-water sailors in this book, such as, don’t forget to pack the drogue. The audio book is excellent too. I listened to it during a recent 9-hour single-handed voyage and did not want to pause it. (Listening to audio books about sailing while sailing single-handedly is truly one of life’s little pleasures.)

Closer to home (at least for me), The Proving Ground is a gripping account of the disastrous 1998 Sydney to Hobart Race. G. Bruce Knecht’s account is so absorbing that you feel like you’re right there in the midst of the storm. It's a must read for any blue-water sailor as there are so many lessons to be learned. Rob Mundle’s Fatal Storm is my other great account of this race disaster.

Next are my top 5 single-handed sailing adventure books:

Set in the deep south of the frigid Southern Ocean, Ice bird, is the thrilling adventure of the first single-handled voyage to Antarctica by David Lewis in 1972. Remember that back then, just like the Baileys, sailors had no GPS, no EPIRB, so sat phone and little chance of rescue. And as if that wasn't enough, there were icebergs and polar bears to deal with. (OK, that last part is a furphy; polar bears only live in the Northern Hemisphere).

True Spirit is Jessica Watson’s inspirational story of the youngest person to sail around the world single-handedly non stop (2009). Her story is testimony to what someone with a dream and sufficient dedication can accomplish. My only complaint is she writes so much about her food, that at times it feels like a culinary adventure, not a sailing one.

Solitaire Spirit recounts the earlier adventures of the considerably older, and more eccentric, Les Powle, who sails round the round 3 times solo, starting in 1975. Les had hardly even sailed before he turned 50 years of age, let alone circumnavigated the globe, so it goes to show that it is never too late. Never mind that fact that he accidentally ended up in the wrong hemisphere on his first attempt.

Across Islands and Oceans is James Baldwin’s account of his 2-year solo circumnavigation from 1984 to 1986. What sets it apart from all the other circumnavigation accounts is that the author walks across every island that he visits, which adds greatly to his adventure.

Last Man Across the Atlantic is Paul Heiney’s humorous account of his 2005 Singlehanded Transatlantic Race adventure. He entered the race as an amateur sailor in his cruising yacht, fully expecting to be the last man to finish, hence the title. Quoting him: “It’s enough to be able to say you climbed Everest without having to run up it as well. And this is the sailing Everest – for me, anyway.” I really enjoyed his account of how he achieved his "personal Everest" and, as also exemplified by Les Powle, it's better late than never.